T-shirts
In 2018, for the fifth straight year, T-shirts reigned as the number-one promotional product category. Logoed tees made up 15.1% of distributor sales last year, a slight increase from 2017. The continued success of the product, distributors say, is partially because it’s just so easy to sell. 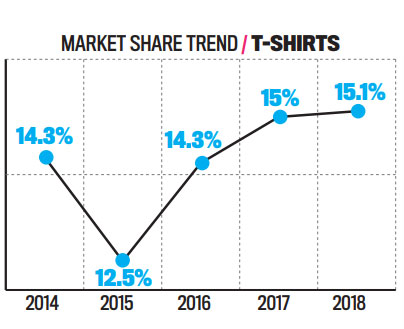 “T-shirts make a great giveaway. They’re both a memory and a walking billboard of what you’re doing at the time you’re doing it,” says Jacque Lee, CEO of Silva Screenprinting & Distribution (asi/326062), which mostly sells tees for the corporate recognition and direct-to-retail segments. “They’re also an easy way to document what’s going on in your life cycle, like college or a new job.”

As for color trends, Jo Girard, owner of Hot Shots Apparel (asi/227751), has seen an uptick in plain white tees with kitschy quotes from movies or sitcoms on them. Conger says the basic core shades are still winners, and safety colors – like neons – are always popular. Coral, Pantone’s Color of the Year, has been gaining traction as well.

One Size Doesn’t Fit All: Here’s a look at the best-selling product categories for three different distributor revenue classes in 2018, with numbers showing the percentage of promo revenues.

Don’t Miss: Get More Out Of Promo Bags

Of course, while trade show T-shirts may not be über-personalized, they can still be valuable for newer brands. “They last a long time, they’re a crowd pleaser, and they make one’s business feel legitimate once it’s imprinted on a T-shirt,” says John Fallon, general manager and partner at Speedy Bee Tees (asi/332198).

On the Rise
Drinkware
The second-largest category for 2018 promo sales, drinkware has vaulted higher in popularity. Why? A few reasons: Increasingly, drinkware has become a fashion accessory; more buyers are moving away from single-use water bottles; and retail brands like YETI are now trendy in promo. 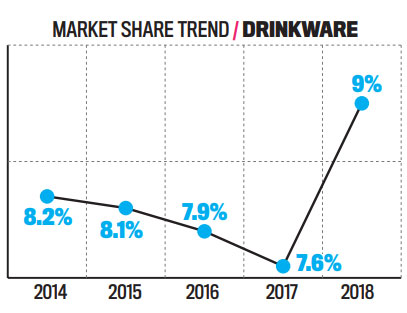 “These products have really increased sales for a lot of people,” says Henya Betras, owner at Henya Direct (asi/224464). Back in the ’90s, Benya thinks higher-end drinkware pieces were too expensive, “but all of a sudden, there’s been incredible awareness” in terms of value and functionality.

An emphasis on health and sustainability has also given the drinkware category a boost. “So many people are into recycling and reusing,” says Brandy Meeks, owner at Element One Promotions (asi/161686).

Frable agrees, noting “people are so much more focused on taking in enough water every day. A lot of businesses are seeing that, and pretty much any company can put their logo on it.”

Will sales of this market slow down? Betras doesn’t see it, believing drinkware could well surpass other products in popularity in the near future. “Pens are great, and so are T-shirts and caps,” she says. “But a two-year-old isn’t going to use a pen. A two-year-old to a 90-year-old, though, is going to use a drinkware product every day, all day.”

Trending Down
Writing Instruments
In 2013, logoed writing instruments accounted for 10.4% of distributor sales. After several years of market share declines, the category contributed just 5.7% to distributor revenues in 2018. The reason for the shift, according to distributors, is simple. 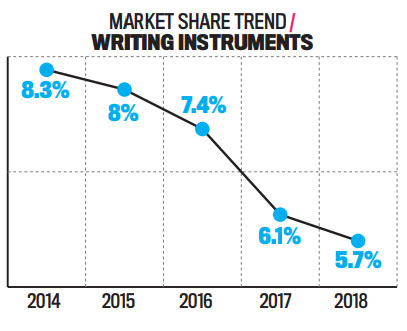 “More people are going toward electronic data,” says Sally Back, owner of Backhome Creations. “It may be that they’re using their tablets instead of using paper and pen. I do sell more pens with styluses now.”

Indeed, while styluses are in, oversized and single-function pens are not on-trend, according to George Taggart, president of Medical Print Group (asi/267106). He further suggests distributors push fancy rubber grips, full-color imprinting and hybrid inks, as these features have been gaining popularity in the market.

“The key is getting the pen to someone,” says Dale Hannasch, owner at LA Advertising (asi/255484). “Put it in their hand and give them the feeling of getting a free pen. If they give their own pens out, their customers will probably feel that way too.”

Forecasting Growth
Health & Safety
If you’re looking for a category to watch for gains, health and safety products certainly has a number of advantages. First, the segment increased market share to 2.9% in 2018, up from 2% the year prior. Also, the category benefits from practicality – items like hand sanitizers and lip balms are universally appreciated. Finally, the segment is ripe for new product entrants, especially as more Americans crave wellness ideas. 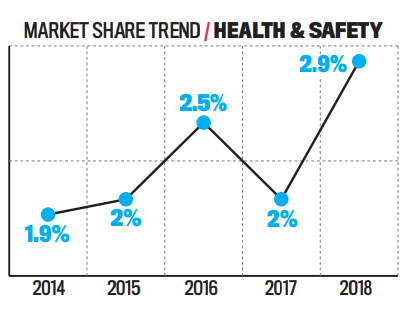 “When a new product is introduced in some product categories, there might be a long adoption time,” says Nate Kucsma, ASI’s executive director of research. “But in this particular market, there’s a quick adoption time. Be alert for new products and innovations coming out.”

And with new innovations come a chance to profit, and the health and safety market is one of the more lucrative places to find it, according to Timothy Lang, owner and founder of Team Lang Promotions (asi/466861) and a former healthcare director.

“There’s usually a good budget, and if you provide a consistent and high level of service, you can generally keep clients longer than some other industries,” Lang says. 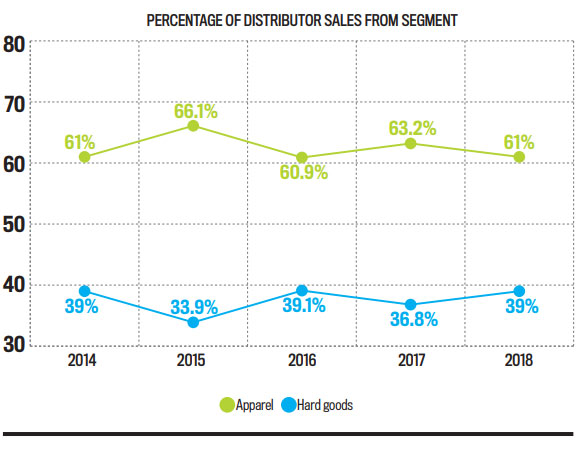 Perception vs. Reality: With the rise of logoed T-shirt sales, some might think apparel is taking market share away from hard goods. However, the segment split has actually been relatively stable over the last five years.

The market dynamic is changing as well, Lang notes, giving distributors an edge. “Historically, there was split within the medical industry of B2B and B2C,” he says. “Most primary care providers, urgent care centers and chiropractors would market direct to consumers, and large specialty groups would market B2B to other providers to get referrals.”

With consumers more educated today “they’ll often change providers if they’re not satisfied,” says Lang. “This is causing specialty groups, which is a very large segment, to start focusing more on B2C for engagement and retention.” 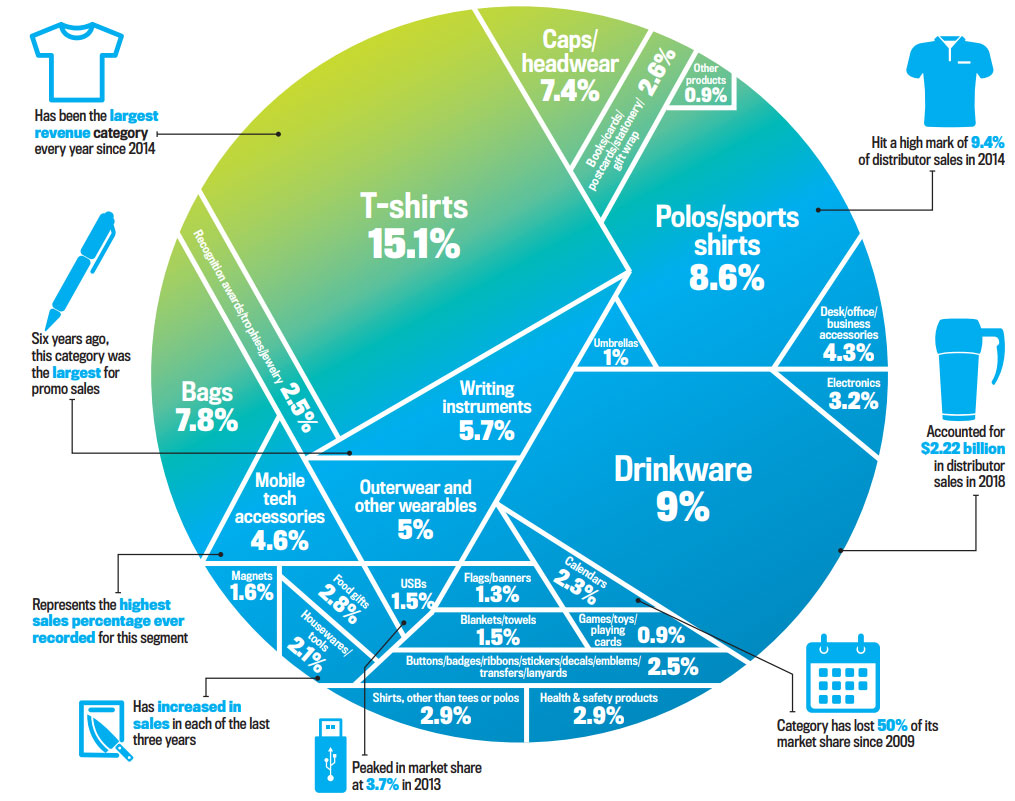 The World of Promo Products: A breakdown of the most popular items, shown here as the percentage of distributor sales they represented in 2018. Click here for a larger image of the graphic above.

Lori Bauer is iPROMOTEu’s Senior Vice President of Affiliates Sales and Support.
In this role, Lori serves as the company’s senior executive responsible for increasing sales among iPROMOTEu’s Affiliates and ensuring that the Affiliates have all the support they need to succeed.

With over 22 years of experience in the promotional products industry, Lori has had a successful career with Koozie Group, formerly BIC Graphic North America.
Most recently, she served as Senior Vice President of Sales where she led a team of more than 50 sales professionals.
In addition to having received many other industry honors and awards, Lori was named ASI’s 2019 Supplier Woman of Distinction.

With over 23 years of industry experience, Joe will oversee all aspects of vendor interaction and supply chain for the company. Most recently he was Regional Vice President of Sales for alphabroder where he was responsible for management of apparel and hard good sales in the company’s Northeast region. Prior to alphabroder, he served in a number of leadership roles in sales, marketing and operations for industry suppliers Prime Resources and Jetline.

Dave is the Vice President of Information Technology and is instrumental in leading the technology team and the development of iPROMOTEu’s innovative  technology platform.

Prior to joining iPROMOTEu, Dave served as Director of Logistics Technology for Cimpress, the parent company of VistaPrint. He was responsible for establishing and leading project management, software engineering, data analytics and delivering logistics software solutions for global fulfillment operations. He also was responsible for aligning logistics optimization opportunities across businesses through software solutions and continuous process improvements achieving annual savings and revenue enhancements over $20M.

As the Vice President of Marketing, Donna is responsible for the strategic direction of iPROMOTEu’s corporate marketing and communication efforts. Donna brings over twenty years of experience in marketing, communications and sales within a variety of industries. She has extensive experience and expertise with corporate brand strategy, strategic marketing, including traditional and digital media, social media, advertising, and public relations.

Donna is a graduate of Boston University with a degree in Mass Communications and Marketing with a minor in Sociology.